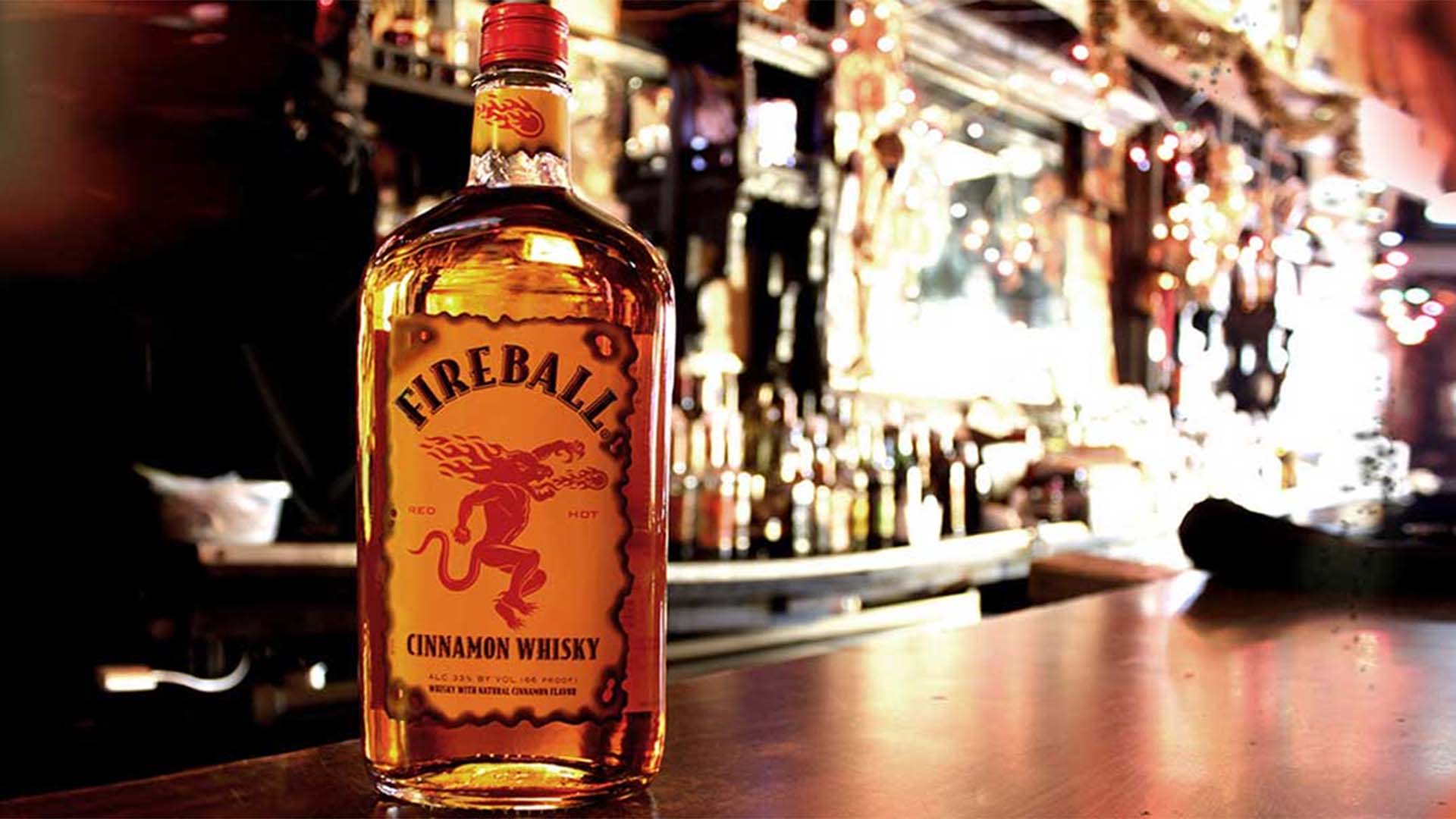 When I was under pressure in the past, I used to drink wine. I went to a restaurant with my best friend one day. I did not know anything about wine at the time, so I just drank anything the waitress advised. She then requested a fireball whiskey. It was the first time I had drunk such fine Whiskey. Since then, I have grown fond of it and begun looking for additional information about it.

Fireball whiskey’s base is Canadian whiskey. In addition, its flavor is identical to the “Atomic Fireball” candy of the Ferrara Candy Company. In the mid-1980s, Fireball was developed in Canada, allegedly even during the nation’s harshest winter, and debuted in the United States in 2001. 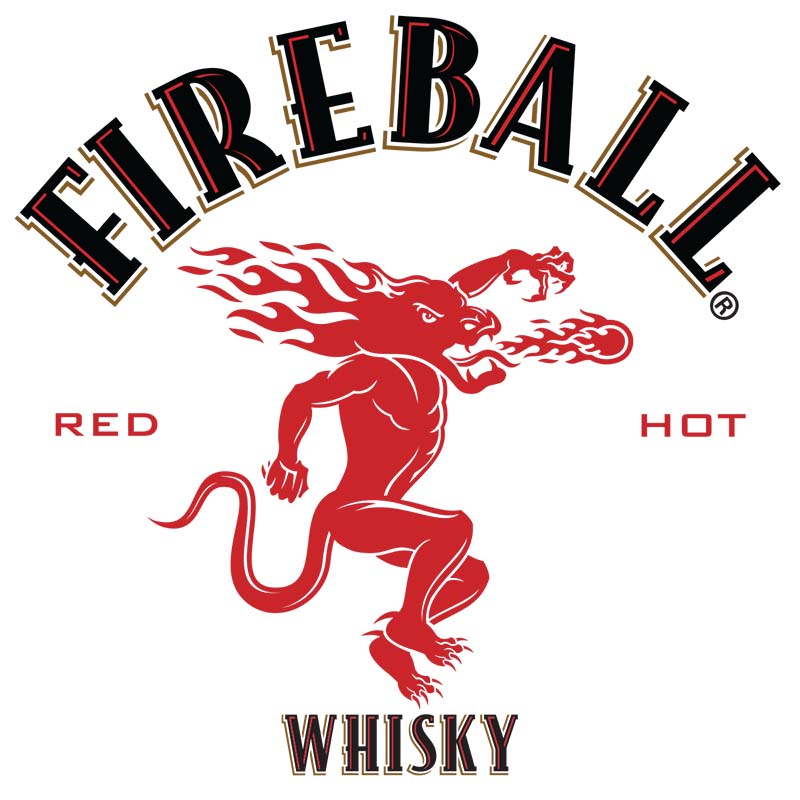 You can quickly identify Fireball Whiskey by its logo that appears on every label. The full name of the main Fireball Whiskey appears on each bottle. The first phrase appears at the top, forming an arc, while the third and fourth words are written at the bottom, covering one center-aligned row. The picture of a fire-breathing creature with hooked limbs and limbs, a muscular torso, a lengthy tail, and a massive dragon’s head separates them. The beast leaps, and a fireball bursts from its wide mouth.

The text “red” is on the left side, above the tail, while “hot” appears on the right side, under the fire. The primary product information takes up the space at the bottom of each label. The proportion of alcoholic in each drink, and the formula, might vary.

One of the reasons for Fireball whiskey’s marketing success is its authentic style. The logo is outstanding against a yellow-brown backdrop which resembles a page of papyrus. The edges seem burning, with scorched burned holes. It is a homage towards the brand and another recall of the scorching flavor of the spiced whiskey. The visual composition’s primary and only component is a beast with a massive blazing head.  At least a part of branding incorporates frequent references to dragons in many settings. 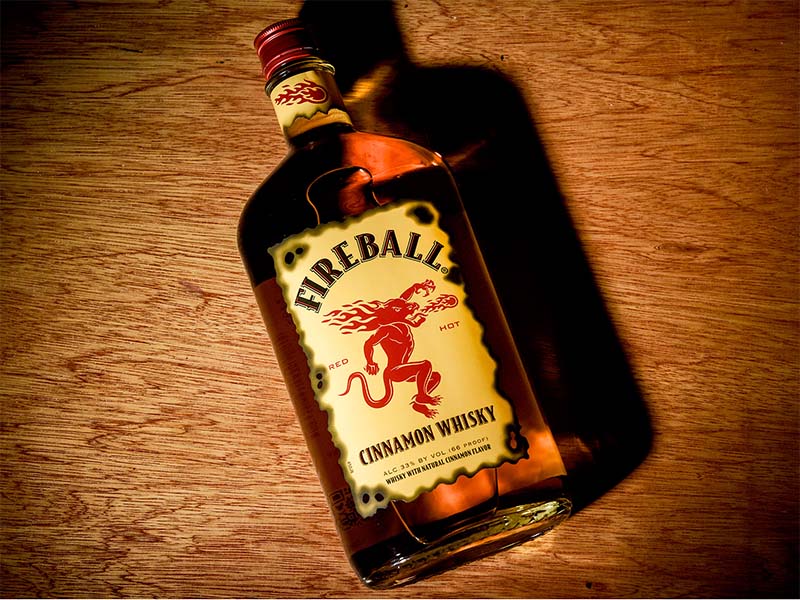 In the 1980s, a Canadian bartender made a mixture, which is known as Fireball whiskey today. He created a spiced liquor to keep himself warm during particularly harsh winters. This beverage became one of Seagram’s line of flavored Schnapps beverages. It was dubbed “Dr. McGillicuddy’s Fireball Whisky.” Dr. McGillicuddy, often called “The Shot Doctor,” was a fictitious character created in 1808. It grew in popularity throughout time, particularly in America.

The Fireball was initially part of Seagram’s range of flavored schnapps. The company’s tale resulted from a Canadian bartender’s attempts to heat up from an Ice storm. In 1989, the Sazerac Company obtained the intellectual rights and recipe from Seagram.

In 2011, Fireball moved only 450,000 cases. It contributed to just $1.9 million in revenue at American petrol stations, grocery stores, and supermarket stores. Fireball whiskey had a boom in prominence between 2012 and 2013, which the firm gained by utilizing social media, developing bartenders, publicity, and a reasonably little advertising spend. Sales increased to $61 million in 2013 – and that did not even include bar purchases, where Fireball controls the shots came. Fireball has already eclipsed Jägermeister and keeps growing. According to IRI, a research company that measures statistics, the brand earned more than $800 million in revenue in 2014, including off the shelf at liquor shops and bars. As Bloomberg stated in 2016, the brand had surpassed Jägermeister in prominence to be the exceptionally highly liquor in America, having anticipated sales of at minimum $150 million in 2015. 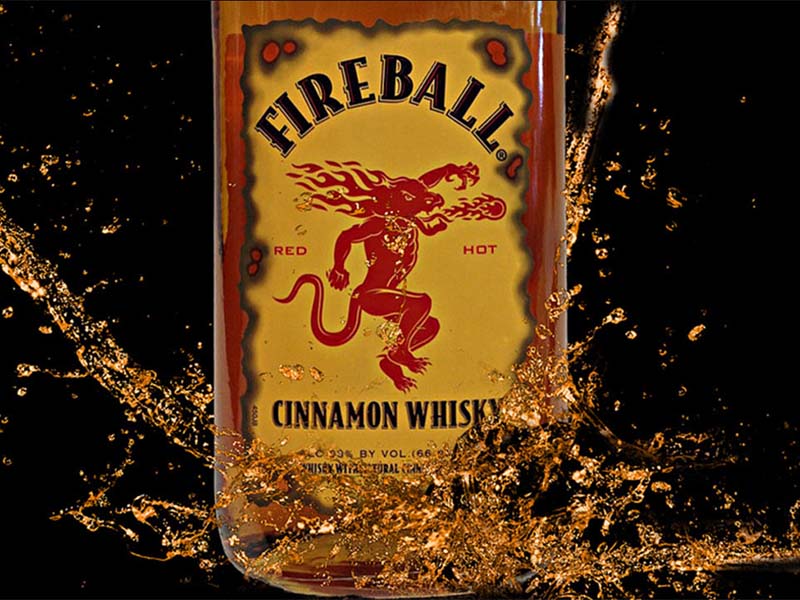 Fireball has been around since 1984, but it was not until the late 2000s that many Americans became a fan of it. Part of the reason for the delay in popularity could be that it was primarily sold in Canada till 2001 under the less-than-appealing McGillicudy’s Fireball Whisky. Since then, America quickly fell crazy in love. Even though Fire whiskey is a late boomer, it is even one of the top ten most popular cinnamon whiskey brands. There are reasons for this product’s popularity today. 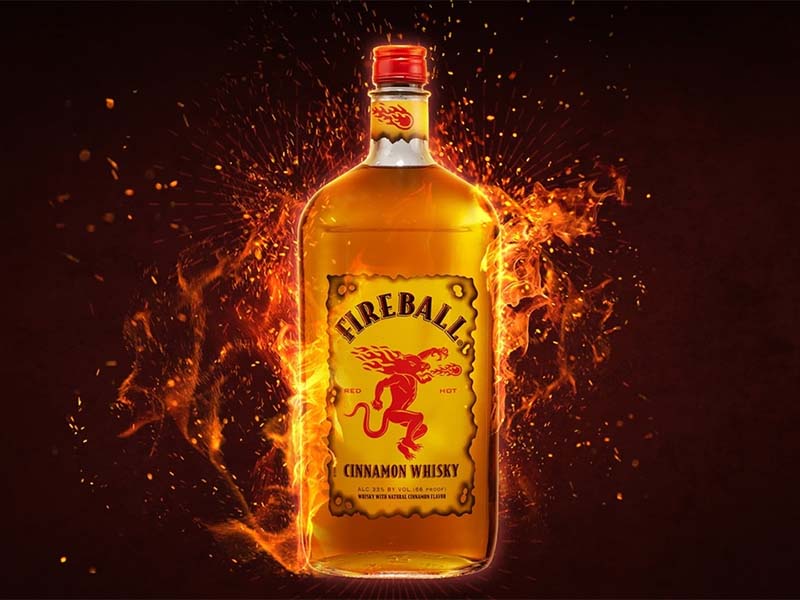 Fireball whiskey is a drink with a harmonious combination of whiskey, cinnamon and natural sugar. Compared to regular Whiskey, it contains 20% less alcohol in 66 proofs. Some drinkers compare it to Atomic Fireball or Big Red bubblegum. Fireball Whiskey has undoubtedly created a reputation itself in the alcohol market, whether you like it or not.

However, several European nations banned the Fireball Whiskey in 2014 due to excessive propylene glycol contents. Despite that, do not panic. Both the FDA and the CDC have determined that propylene glycol is harmless at low concentrations. Fireball quickly changed its European containers and has not banned any items in the United States. Furthermore, you have likely been ingesting propylene glycol since a long time ago; you may find this ingredient in several products, from makeup to ice cream.

People also use propylene glycol in various ice creams or beauty products. Supervisory and regulatory authorities in many nations have certified this ingredient. Nevertheless, because of its resemblance to ethylene glycol, a quite hazardous ingredient of coolant, many people have questioned Fireball’s security. Even it was outlawed in specific EU nations for a while. For other countries, this did little to tarnish Fireball’s reputation. This announcement corresponded with a significant increase in Fireball consumption, indicating that most of us love a little hazard with our cocktails.

In addition, there have been rumors that this Fireball whiskey is glycol, an artificial sweetener that is very sweet. Some countries in the world allow adding that substance to food as long as the quality is good. However, in other countries, it is not permitted. When you smell this product, you can experience a wonderful cinnamon smell but slightly sweet. Cinnamon is a dried bark, and if you mix it in that cinnamon, it is typically sweet. However, as a raw spice, it is spicy. 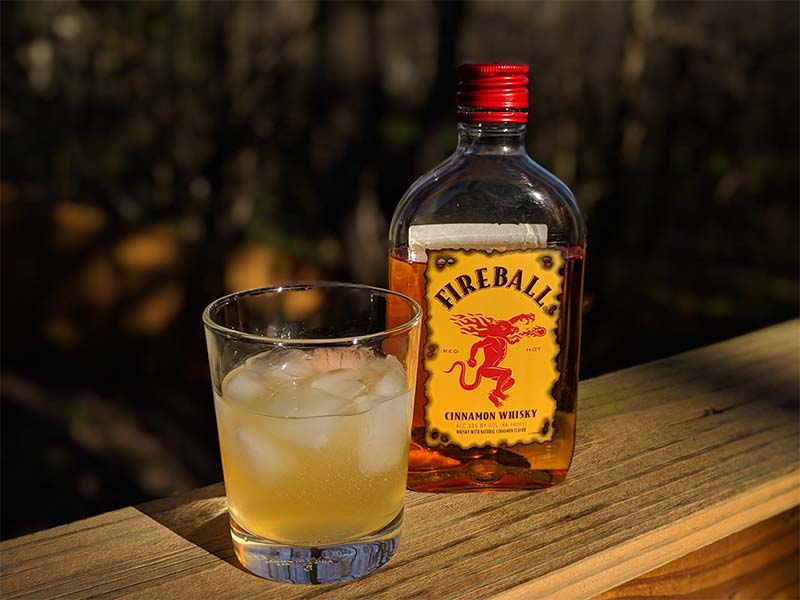 It is pretty hot and chills when you taste it, which is the opposition to the sweetness. The upcoming sharpness is fantastic. It is worth tasting twice.

The aftertaste has cinnamon; however, there is a chilly finish that tastes like mint. Combined with the underlying cinnamon flavor, this produces the hot taste that many people identify with spicy sweets. However, you should be careful because the sharpness with the sweetness and the alcohol might be in an igniting mixture where you light up the night as the brand said on the label’s back.

The Fireball whiskey is excellent for shots or blending with drinks. You can combine it with any fruits if you prefer a sweet mixture. Because the cinnamon taste complements apples, you can use apple cider. Otherwise, for a better taste, you can also substitute spiced rum for it. If you do not like the sweet flavor, you can blend your whiskey with several of the most significant spices. 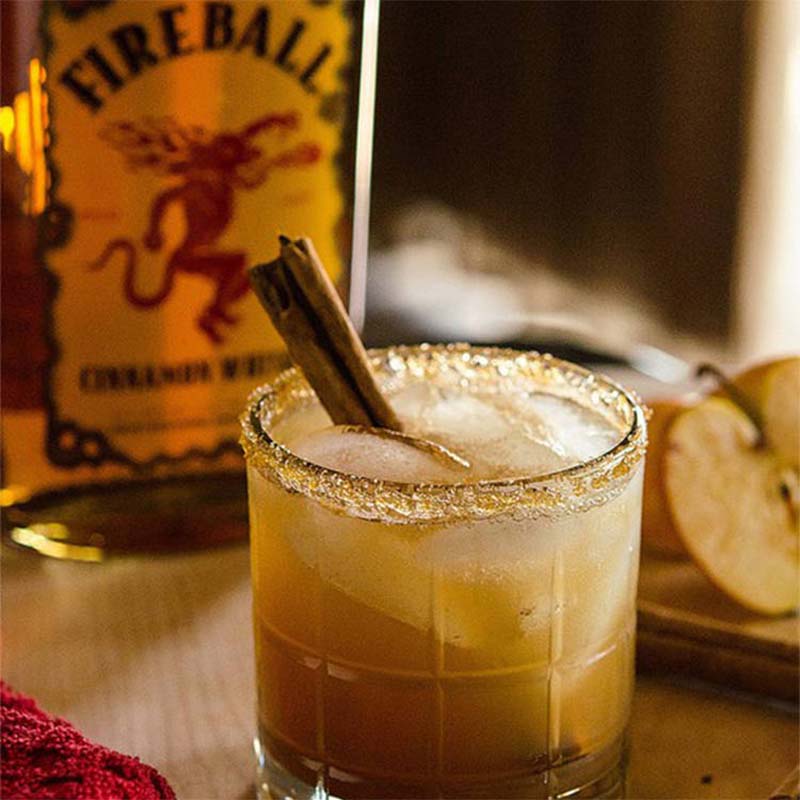 Pink Lemon Fireball Whiskey is the first recipe among the top 12 Greatest Fireball Whiskey Cocktail Recipes 2021. While this may appear to be an odd mixture, the outcome is a well-balanced, sweet, and quite spicy drink. Grenadine lends a blush color to this cocktail, whereas a fresh lemon accent adds much-needed acidity.

Cinnamon, together with ginger, suit each other beautifully in this Fireball Mule mix. This mule has many bites to it—one portion Fireball Whisky, two proportions ginger ale, lime juice, as well as pineapple juice.

A Fiery Russian is a White Russian made with milk, choco liquor, and vodka. To have a smooth cinnamon flavor, you can replace the alcohol with Fireball Whiskey.

If a pure dose of Fireball whiskey is too much for you, a tasty blended shot is simply a few components away! To make this delicious Hot Little Honey fireball cocktail, you can combine Tennessee honey with Frangelico and whipped cream.

With only three components, including Fireball, mango juice, and dry red wine, the Fireball Sangria mix is ideal for entertaining guests, which can be the best party drink mix to offer at a swimming pool or outdoors party.

Hardly anything sounds way better, like a cherry-infused drink and a balcony to relax on now that Spring has arrived. With this Cherry Tree Fireball recipe, you may find your next refreshment on a Summer night.

You can drag the sliders to adjust the meal weight for seeing calories and other nutritional statistics for various weight amounts. You may require food scales for accurate measuring of food quantity. You may estimate the volume of the meal by measuring your palm to the amount of food. A finger is nearly 30 grams, a flattened palm is roughly 120 grams, and a clustered fist weighs 240 grams.

A dose of Fireball Whiskey has 108 calories, but that is probably not so bad considering all the sweetness. A typical amount of whiskey contains merely 70 calories. In case you have not noticed, the usual whiskey seems to have a greater alcohol concentration. On the other hand, low-calorie beverages are difficult to come by. For 100 grams of Fireball Whiskey, it contains no protein and fat. In addition, 100 grams of this product have no carbs, sugar, or salt.

Fireball Whiskey is Not Vegan-Friendly 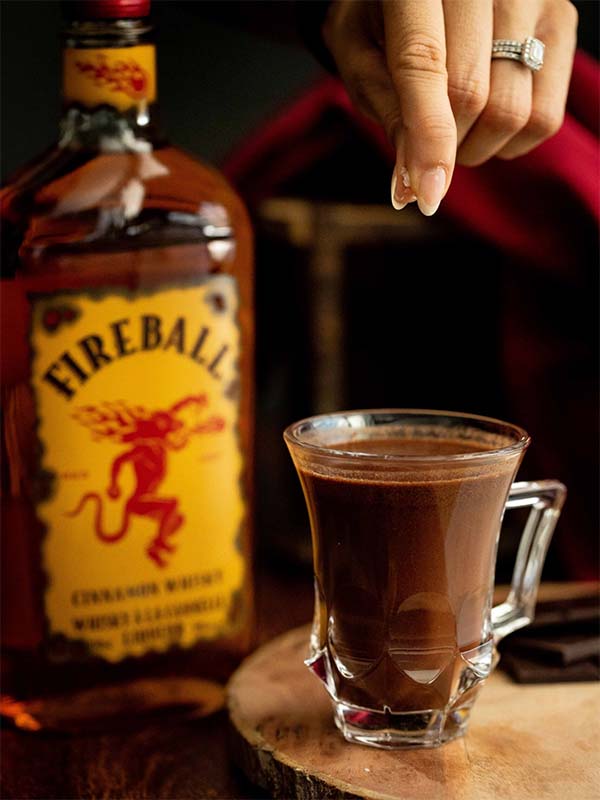 Regrettably, Fireball Whiskey is not vegan-friendly. According to a business spokeswoman, Fireball is vegetarian, containing no animal meat or other derivatives. It may, nevertheless, have components derived from animals, including honey and isinglass. Several ingredients purchased by the company from third-party sellers include trace amounts of animals derived products. Simultaneously, whiskey manufacturing may require the usage of filtering or other animal-derived components.

The reason for Fireball Whiskey’s non-vegan status remains unknown to many people. Whereas the beverage does not seem to include considerable amounts of meat products, several people argue that continual cross-contamination and improper third-party processes render Fireball Whiskey unable to maintain vegan status.

Also, Fireball’s parent firm has been in several conflicts and restrictions from nations worried about the composition and chemical components of the famed whiskey.

Fireball Whiskey is a sweet-and-spicy whiskey with such a comforting bite. Rather than diversifying into multiple flavors and packaging, Fireball has focused on quality and doing it well. Its hallmark whiskey is just a reasonably priced drinking alcohol that goes well alone, like cocktails, hot and cold drinks, and various other applications.

The chances are no whiskey is more famous for innovative, fancy shot formulations than Fireball. Since taking it alone is so powerful, and it is somewhat less addictive than other types of whiskey, most people find combining it for doses appealing. To some extent, it may make you feel more head over heels in love with this drink. Due to its popularity all over the world, you should know these facts about Fireball Whiskey.

Although Liz has graduated from working "gigs", you will still see her smiling face at our Plated Landscape Dinners in the summer. When she isn’t wearing one of her many Spice hats, she is at home “weeding” in her secret garden, giving a random stranger a ride home, or hanging with her husband Jed and growing daughter, Ava.